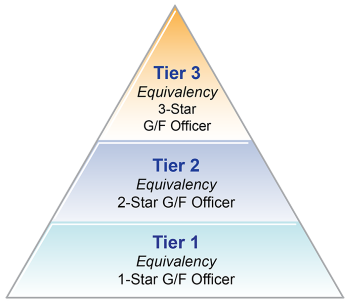 Established in 2008, the DOD tiering structure was created to provide enterprise-wide transparency and comparability in executive position and compensation management. Senior Executive Service positions are aligned through this common tier structure which plays a critical role in almost every aspect of DOD’s executive lifecycle management. The tiering structure allows DOD deliberately to manage the executive workforce and conduct periodic evaluations to determine succession planning and career development. Additionally, it allows executives the opportunity to gain experience through a sequence of positions or roles before reaching senior leadership positions.

Tier 1 is equivalent to EX-III; tier 2 has been defined annually by the Under Secretary of Defense (Personnel and Readiness) at approximately the midpoint between the rates for EX-III and EX-II (under a certified performance management system); and tier 3 is equivalent to EX-II. The minimum rate of compensation for an executive in the DOD is GS-15, step 04 plus applicable locality.

When setting or adjusting an executive’s pay, DOD Components consider a number of factors to include:

The tiering structure allows DOD to deliberately manage however, this is not overseen at the DOD level.